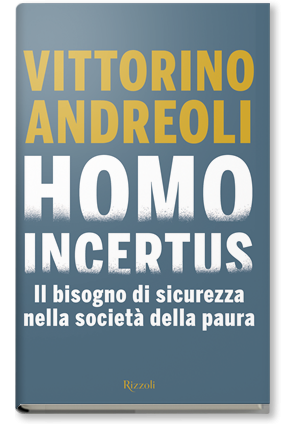 “In recent years, the thing that strikes me most is that people show great insecurity: a feeling that has always been there, but taking care of men and in particular of the man who suffers, the 'madman', the man broken, I realize that it has become a dominant theme “.

In the center of “Homo incertus”, The last book, published by Rizzoli, written by Professor Vittorino Andreoli, psychiatrist and scholar of contemporary man, there is the reflection on the sense of uncertainty that we live and that invades every field: from society, to the family, to social relationships, to the point of drawing on our inner self. “It is a paralyzing insecurity that invests us inside and outside of us,” explains the Professor to Huffpost. “The result is a man who ends up living badly and doing nothing, who no longer even has the courage to act.”

“Courage is an important word that is linked to fear: you have to be afraid to have courage, but if the fear is in excess and becomes panic, you don't move anymore. I see this man who is waiting there and you don't know what you're waiting for. My job as a psychiatrist is to try to make people understand that something needs to be done in a society where even what should give security generates insecurity today: this is the meaning of the book and the title ”.

What causes this serious insecurity in today's man? What feeds this fear that you describe as paralyzing in all fields: in society, in the family, even within each of us?

On the one hand there is the insecurity within me, on the other there is the insecurity that I feel but that lives outside of me. The big issue to ask about is the outside of me. The usual question my patients ask me is 'what will happen?'. It is the uncertainty of the future that frightens them. A society of fear emerges in a world that constantly lives in war, real and figurative.

There is still a war wind in the world, people warn him. Thanks to the speed and ease in finding information, we know that there are people who have a machine in their hands and that in 15 minutes they can decide to unhook 3000 wishbones triggering a conflict that is not so far from us. And this frightens us. But it is not just a war with war devices that we fight. There is not a moment of peace even in what Plato called the Res Publica. Politics no longer has an interest in public affairs because it is managed by frightening the citizens who get up every day and wonder what will become of the government, what will become of the “war” unleashed by politics.

And this fuels people's uncertainties.

Of course, and not only. Think of the struggles in apartment buildings, in schools, where parents beat teachers. There is a world outside of us where there is nothing to reassure us. Tell me a place to rest easy. Not even the temples of God. I have great respect for religions, because I know man's need to compensate for the difficulties of life in ways that are a little more just, but the Churches have become a danger too or there are He asked where the Transcendent can no longer be breathed. They are closed.

What are the social tools that should give us security?

Insurance, for example. And do you think that the insurance system that is in the hands of banks, which is based on money, is a safe system? Or again: today's young people should be able to be sure they have a pension and instead it is another reason for uncertainty. Healthcare: will they have the opportunity to go to an emergency room and be received? Healthcare should give you security and instead there is a terror of entering a hospital. And then there is the insecurity that hovers within us: one could say 'I live in a desperate world, but inside me I have peace', instead even this is not granted to us.

Relationships: today we consume feelings as we used to wear shoes. Years of relationships are thrown away: by this I do not mean that relationships must be perennial, but we get rid of them too easily. It seems to me that the sense of ties has been lost: one says 'I am no longer with that or that and I close'. But it's your story, it's your past, I say. Even relationships that are an inner need to be tied to someone else in order to be defended no longer work, because everything that was bond now becomes a breakup. I do not see any element, internal or external, that could be a foothold capable of giving security. The family, it will be said. But it is the place where there is greater violence.

How did we get to this point?

We no longer have any principle and we live in a society that seems to “enjoy” itself to frighten us. Think of the Chinese virus: you read that it wanders, that it moves, perhaps it has arrived in Australia, perhaps with a mutation it can arrive in Europe. This is terror. Politics lives on the fear of men: politicians must break in order to command, when politics is still “construction”, tell me who in our moment of our politicians is “weaving” instead of destroying? There are politicians who have to defend themselves in Italy as well as abroad and the first thing they do is to frighten, to remove people's thinking from their troubles. There have been attempts in this country to create false problems: poverty has increased because misery allows us to dominate better. Politics has become the occupation of places of power in order to make things go wrong.

Are you saying that the fear matrix lies in the wrong administration of public affairs?

Not in the administration of public affairs, but in the “logic of politics” and this generates uncertainty, which generates fear. People don't feel sure of anything. Politics generate fear because it is easier to be powerful and to dominate people who are afraid and in misery.

How do we get out of this situation?

We have to go back to the initial concept of western society, which is dying and I'm sorry. There is a need for public affairs and the first duty is to give security, people must not live in the uncertainty of what will happen tomorrow, in resignation. People must have a hope which is a fundamental concept: today I don't feel very well, but tomorrow! This was not invented by any religion, Freud took it up again, saying that we have a “current I” and an “ideal I”: how I am and how I would like to be. Today there is no longer an “ideal I”, because there is no more hope and there is no longer any idea of ​​the future.

First of all, the strength lies in a democracy that allows you to elect and take away, which allows you to choose your representatives, who believe in institutions, in man. Plato thought that politics should give happiness, today this policy only gives horror because it feeds an internal war and the fear of the other. Humanism must be rediscovered.

Where is the spark of this humanism?

We must find an economy of doing good. The satisfaction, the gratification of per-donating, in the sense of giving something of oneself. Finding the sense of the other, not having the culture of the enemy. We need to make this peaceful revolution within us. This is the request that I am asked most often: 'Professor, how do I go about living a little better? Fearless? Without the danger of anything? ' We need to rediscover the sense that man needs the other man and start from here. A lot can be done, because there are many decent people in this country, but they don't count for anything. If there is hope, it is in NONE, write it in capital letters. I want to be a NOBODY.